Wishing Upon A Star 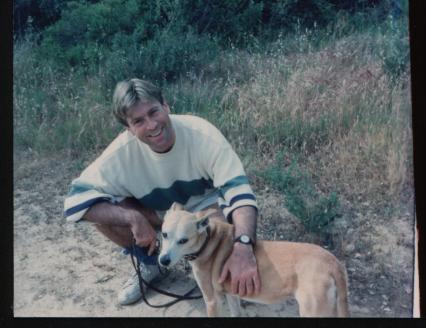 The eve before his birthday, my son David and I would imagine him flying to a magic star where every wish of a four, five, or six-year-old…would be granted. As appropriate the star would be stocked with favorite foods, limitless TV-watching, extravagant toys, a no-homework school and no bedtime.

My son was a big kid, and even later, whenever we were able to share his birthday we would play the magic star game. The accoutrements of the star kept changing. There were sports cars, and luxurious vacations, and designer clothes, and glamorous new boyfriends. From 1987 on, the star grew darker. Though worldly goods still stocked it, our main wish was that it would supply him with a cure for AIDS.

Twenty years ago, February 19th 1993 was the last birthday I shared with David. I had flown out to San Francisco where I cooked a big dinner for him and his many friends. We were happy, laughed, and toasted each other. I remember “the kids” rolling around on a big exercise ball that somehow had materialized in the apartment I had rented for my visits. The month after his visit David flew to South America and developed pneumocystis pneumonia. Three months later he died.

If the magic star had been real, I would have wished for gay liberation to have come a generation or two earlier. My child’s gayness may have contributed to our being so uniquely close. My having been a child of the Holocaust taught me how much discrimination binds you to people who see and love you with unbiased eyes, and I have always had plenty of friends. However I also know all too well that it is not always easy for them to stand up for those whom society considers “unfit.” I remember the veil of pity that passed over the face of sympathetic others to whom I told that my son was gay. I learned to share cautiously.

Prejudice never dies completely, even when the laws change. Jews have fought for equality for over two thousand years, African Americans since the settling of the colonies, gays from the time Adam and Eve were kicked out of the Garden of Eden.

I wonder how different it would have been for David and me to live in a less prejudiced world? Would I have turned out to be less compassionate? Would I have worked less hard for my place in the sun? Would I have been less appreciative of the many good things that came my way?  Most importantly, I know that the U.S. government neglected to fight the novel fatal disease because it emerged amidst male homosexuals and intravenous drug users two discriminated against groups. If it had first affected an upscale group of citizens, I still might have my son.

Even though David is no longer here, February 19th is still a good day for me. He loved life and took such a childlike pleasure in small things, that his family, his friends and I will still feel his warmth enveloping us all, especially on his birthday. Maybe I’ll even revisit our magic star. I never run out of wishes: a green earth, gun control, a more equitable distribution of wealth…David, happy birthday.