Max Beckmann at the Metropolitan Museum of Art 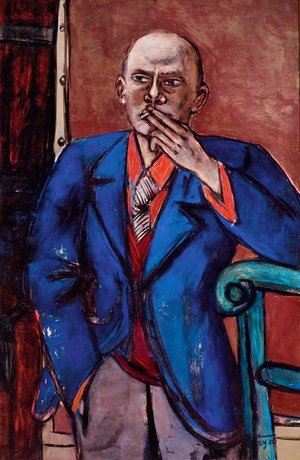 “Thank God this painting is in New York,” Sabine Rewald kept repeating as she led a flock of reporters through the magnificent exhibition of Max Beckmann paintings that she had curated for the New York’s Metropolitan Museum of Art. Given the fact that Max Beckmann’s paintings were declared degenerate by the Nazis in 1933 and therefore in great danger of being destroyed, Rewald’s remarks were not parochial. The Met’s current exhibit celebrates Beckmann’s end of life residency in New York City. The exhibition runs from October 19, 2016 – February 20, 2017.

Most works in the exhibit were either painted during the artist’s two-year-long New York residency and/or are owned by the city’s collectors and museums. New York was not the only American city to embrace Beckmann. The Saint Louis Museum of Art owns the largest collection of Max Beckmann paintings in the world.

In 1933, Beckmann was at the height of his career and many critics considered him Germany’s most significant painter of the twentieth century. The Nationalgalerie in Berlin devoted an entire gallery to his paintings, subsequently dismantled by the Nazis. The Bark, part of the current exhibit, entered the German museum in 1927. Because it was judged degenerate, Beckmann exchanged it for two more traditional works in 1933. These lasted in the Berlin museum until 1937. A U.S. collector bought The Bark in 1946. The image consists of a towering group of six individuals crowded in a sailboat. Quappi Beckmann, his beloved second wife who is drying herself after a swim, heads the group.

Beckmann painted a great number of self-portraits. During the first part of 1950 he painted Self-Portrait in Blue Jacket, which features him puffing on his ubiquitous cigarettes, his hand in his pocket, his jacket and shirt fitting his frame loosely. The Met featured the new work in an exhibit called “American Painting Today 1950,” a title that indicated that the museum considered Beckmann an American artist. On the morning of December 27, two weeks after the opening, Beckmann set out from his apartment on the Upper West Side to see the painting. He suffered a fatal heart attack before reaching the museum.

The Museum of Fine Arts in Boston owns Beckman’s best known Self-Portrait in a Tuxedo (not in the Met’s exhibit). The almost as famous Self-Portrait with Horn, in which the painter seems to listen intently to his beloved instrument, is on view because it belongs to the Neue Galerie in New York. It too is a moving rendering of the painter as observed by himself. 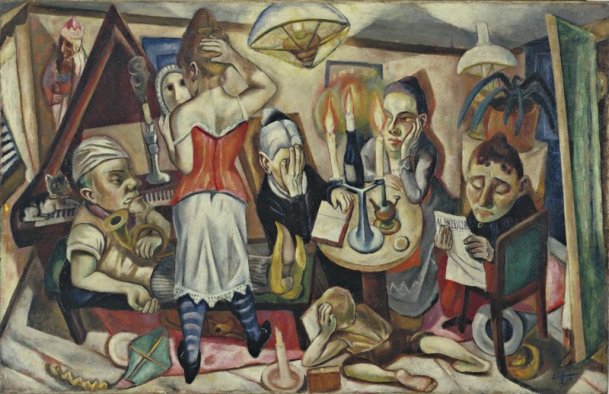 Both Beckmann and his horn appear in a 1920 Family Picture. The portrait also depicts his first wife Minna—viewed from behind, completing her toilette—her mother, sister, and Peter Beckmann, the artist’s son. Candles, a newspaper, a small dog and other typical Beckmann paraphernalia complete the picture. It is an amusing work, reflecting on the disorganized nature of many family get-togethers. As Sabine Rewald points out in her fascinating catalog, J.B. Neumann, Beckmann’s dealer, included Family Portrait in the artist’s first New York solo show in 1927. Abby Rockefeller bought it at the suggestion of Alfred Barr and it now belongs to MoMA.

I was particularly moved by The Old Actress. The severity of her white hair is balanced by a loose wisp; an enormous nose and closed eyes reflect the dignity of old age. The unknown woman wears an elegant but simple black dress relieved by white cuffs and a lace blouse. Her typically large Beckmann hands clutch a cat. The primary colors—the yellow background, the red upholstery of the chair, the black and white of the dress—enhance the drama of the silent figure. Abby Rockefeller also bought this painting in 1930.

MoMA’s Departure triptych also made the show. It was painted in Frankfurt and Berlin during the late 1930s. Ever since, the meaning of its strange imagery—king and queen, oarsman, torturers and tortured—has escaped scrutiny. By declaring that it was scenery for King Lear, Beckmann managed to take Departure with him to Holland, where he spent the war years. It arrived in New York in 1938 at the gallery of Curt Valentin. Alfred Barr bought it for MoMA in 1942 even though, when approached, Beckmann refused to provide him with an explanation of what it meant and wrote Valentin a letter:

“Remove the painting or return it to me, dear Valentin…It can speak only to people who, consciously or unconsciously, carry within themselves the same metaphysical code…Departure. Yes, departure from the deceptive appearances of life toward essential things…” (Letter from Beckmann to Curt Valentin, quoted by Sabine Rewald in Max Beckmann in New York, Metropolitan Museum of Art, 2016)

There is something very German about many of these paintings that touched me profoundly and rekindled the feeling I had for my German childhood books and scary Grimm fairytales. It so happens that Beckmann’s (1884-1950) and my father’s (1887-1949) lives overlapped almost completely. When they were young both served in the medical corps of the German army during World War I. Beckmann had a nervous breakdown; my dad fared better. The Nazis destroyed their existence in Germany when they were middle-aged, but in spite of their age they rebuilt it abroad, before dying of heart attacks in New York in their sixties. Both were honest to a fault, as evidenced in The Old Actress, and seem to have possessed that special brand of German satirical humor, as demonstrated in Family Picture.

1 Response to Max Beckmann at the Metropolitan Museum of Art