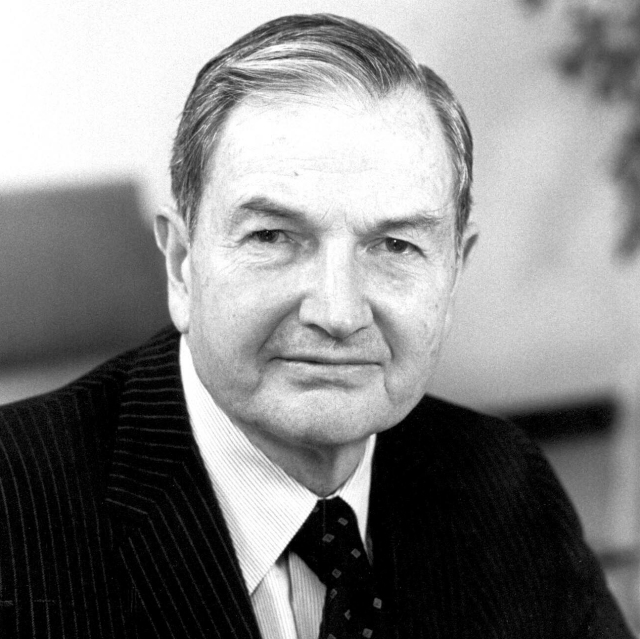 One of the pleasures of being a biographer is that one becomes intimate with one’s subjects without really knowing them in the flesh. So it is, after spending five years writing America’s Medicis: The Rockefellers and their Astonishing Cultural Legacy, with the Rockefellers and me.

In addition to writing the book I have always profited from Rockefeller benevolence. I enjoy the institutions they founded or supported—in America’s Medicis, I identify thirty institutions on which the family left its imprint. I enjoy the lands they donated for me to walk on in New York, Maine, and California. I am grateful for the medical research carried out at Rockefeller University, which improved the world’s health.

I also have some more personal connections. Both David and I own homes—he a substantial one, I a camp—on Mount Desert Island in Maine. I had the pleasure of meeting him on walks on Rockefeller land—he driving his magnificent matched pair of horses, I being led by my poodle; in restaurants; and even in line to use the bathroom at concerts at St. Savior’s Church in Bar Harbor.

David was the youngest and the longest-lived of the five amazing sons of John D. Jr. and Abby Aldrich Rockefeller. John and Abby somehow managed to bring their children up to be successful, mostly caring human beings even though their grandfather had been the richest man on earth. The boys learned to care about God, the beauty of the world, education and art. As Chairman of Chase Manhattan Bank, David managed to enlarge his considerable inherited fortune. He distributed some of it as he went along.

America’s Medicis concentrates on the family’s contribution to America’s art world. The Museum of Modern Art (MoMA) was David’s favorite. Abby co-founded it in 1919 and for decades “Mother’s museum” was Abby’s as well as Nelson Rockefeller’s principal concern. David’s first task for MoMA came in 1953 when he was put in charge of developing the Abby Aldrich Rockefeller Sculpture Garden, one of New York’s most beloved public spaces. The garden fills the lot formerly occupied by the Rockefeller houses on 54th Street. David’s involvement with the museum grew, as did his donations. He assumed the position of chairman of the board in 1962.  Like most museums MoMA often needed more money than it had, and single-handedly managed its finances in such a manner that it could become the mega-museum it is today.

David Rockefeller also assembled a great art collection. It includes work by nineteenth-century French paintings and more modern pieces. In 1968 MoMA was given the opportunity to buy Gertrude Stein’s collection. The museum did not have the funds to acquire it, but recruited five collectors, including Nelson and David Rockefeller, to buy it provided that they would will certain works to the museum. During the sale David acquired eight paintings by Picasso, including Girl with Basket of Flowers and The Reservoir, Horta de Ebro, both of which are destined for MoMA.

In addition to MoMA David had other institutional favorites that benefited from his largesse: Rockefeller University and Harvard University, his alma mater.