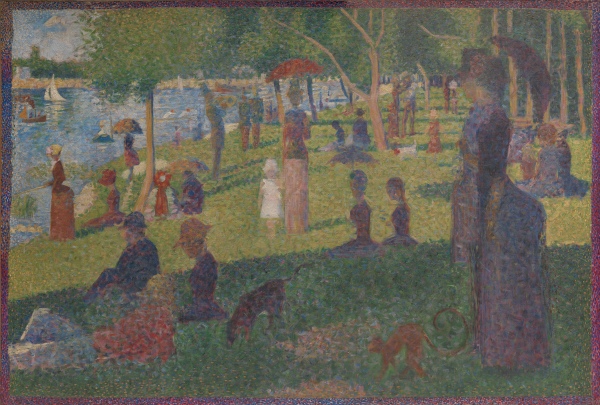 Study for “A Sunday on La Grande Jatte,” Georges Seurat, 1884. (The Metropolitan Museum of Art)

Given the nor’easter that dumped snow all over Central Park and our constantly dreary politics, it is wonderful that the Met is putting on a show that overflows with sunshine and outdoor delights. The exhibit is on the ground floor of the Lehman Pavilion, whose double-height courtyard stocked with plants ably competes with the wonderful show.

The exhibit, filled with many of the Met’s best-known Impressionist paintings, celebrates the 19th century rebuilding of Paris under the aegis of Emperor Napoleon III and Baron Georges-Eugène Haussmann, his urban architect. They demolished rat-infested neighborhoods and added wide boulevards, 30 parks, and verdant city squares that enabled the newly empowered middle class to enjoy the outdoors. The Bois de Boulogne, formerly a royal hunting preserve, became a public green space two-and-half times the size of Central Park. It was inspired by London’s Hyde Park.

The art world responded with luminous paintings, many created outdoors. All well-known Impressionist painters are represented among the 150 works of the exhibition. There is a small version of Georges Seurat’s iconic view of the Grande Jatte with its bustle-wearing ladies, sun-worshipping city-dwellers and frolicking dogs.

Camille Pissarro is represented by views of the formal Tuileries; Manet has a painting of the Monet family in their garden; and glamorous Auguste Renoir chose to paint the royal gardens at Versailles.

Garden at Sainte-Adresse, Claude Monet, 1867. (The Metropolitan Museum of Art)

Claude Monet, who loved gardens, has more paintings in the show than anyone else. He painted public parks like the Parc Monceau, private gardens like the La terrasse à Sainte-Adresse and, most often, his famous private domain at Giverny, with its expanses of flowers, water lily ponds and iconic Japanese bridge. At the Met show an ancient film actually shows Monet painting there.

I personally experienced that magic garden in 1983. That fall I spent two days in Paris. My arthritic left hip throbbed with pain whenever I walked more that ten paces. I paid it no heed, rushing to all my favorite Parisian places: La Sainte Chapelle, Ile St. Louis, Rue de Rivoli, the bridges of the Seine. My only salvation was a long bus trip. It was a beautiful autumn day and I booked a bus excursion to Monet’s Giverny. My hip approved. The place proved as captivating as it appears from its creator’s canvasses. Even in October the colors were beautiful. I loved the water garden, the trellis, and the various paths. I was enchanted by Monet’s house and its simple everyday china. I was the only passenger on the bus who did not have a camera, and earned the following comment from one of the guards: “Madame, I compliment you: you are the only one on the tour who really sees the garden.”