The Only Common Sense Solution to America’s Gun Problem 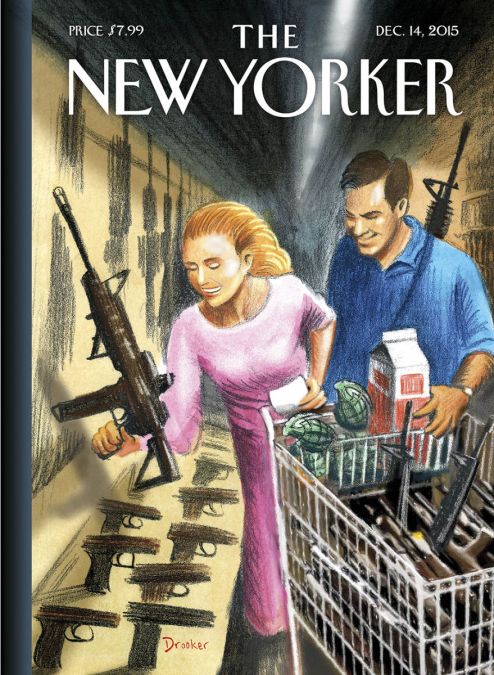 “Une vie ne vaut rien, mais rien ne vaut une vie.”
“A life has no value, but nothing is as valuable as a life.”

Thus wrote Andre Malraux, the great novelist, in 1933. In the United States, Malraux is best remembered as the French minister of culture who fell in love with Jacqueline Kennedy and loaned her France’s Mona Lisa in December 1962.

Lately some members of our human family have ignored both the sixth commandment and other ethical considerations, going on senseless, murderous rampages that have become all too common to read about in the news.

Some Americans’ response to this senseless slaughter is to support the ready availability of guns. Indeed, as the cover art of the December 14 issue of the The New Yorker of illustrates, buying a gun is becoming as easy as buying a dozen eggs. Personally I was shocked to see the display of guns at Willey’s Sports Center in Ellsworth, Maine where I buy some of my clothing.

You will not find me buying a gun, even though I, like anyone else, am moderately afraid of being attacked by robbers, terrorists, drug users, or psychotics. Guns are meant to kill, and I, like most normal people, am horrified by the thought of killing one of my fellow humans.

I also know that being armed would be of little use for me. I would be unable to pull the trigger. If provoked, my assailant would strike first, disarm me, and he or she might harm me with my own weapon. This personal assessment is corroborated by science: many studies indicate that few people use guns for self-defense, and that it is ineffective when they do.

The United States has more guns per capita than any other country. As a matter of fact, at 310 million firearms and counting, this country has more guns than people. Expressed differently, 32 percent of all households, and 22.4 percent of all individuals, own guns. (Statistics from NORC at the University of Chicago.)

And firearms cause upward of 30,000 deaths annually.

The gun lobby stresses that the Constitution of the U.S. guarantees citizens the right to bear arms—though expert say that our founding fathers intended to grant that right to the states’ militias. I doubt that the patriarchs wanted to equip thirty percent of the population with small arsenals. According to Gallup, 29% of gun owners possess five or more guns—entirely too many for the rest of us to feel safe!

Let us imagine that the Constitution had granted citizens the right to drink and drive, regardless of the consequences. In 1980, a mother grieving over the needless death of her 13-year-old daughter founded Mothers Against Drunk Driving (MADD). By 2014 the organization had been able to reduce the highway slaughter caused by drunk drivers from 25,000 annually to 10,000. The measures it took to achieve this 60% drop in no way impaired the nation’s ability to enjoy wine, whiskey, beer or other alcoholic beverages.

Like the majority of the American people I am in favor of reducing this domestic arsenal, but for the time being I would settle for more modest measures. Increasing background checks associated with the sale of firearms, eliminating unlicensed gun dealers, or not providing people on terrorism watch lists with licenses would not interfere with the joy of hunting or clay-pigeon shooting. (Nor, sadly, would it realistically have much of an impact on gun-related deaths in situations like suicide or domestic violence.)

But background checks may keep some guns out of the hands of child-murderers, religious fanatics or people who are obviously unwell. It has nothing to do with freedom; it is simply common sense. It boggles my mind why the National Rifle Association (NRA) or anyone else would object.