Pergamon, and my Belgian History Teacher, Come to the Metropolitan Museum of Art 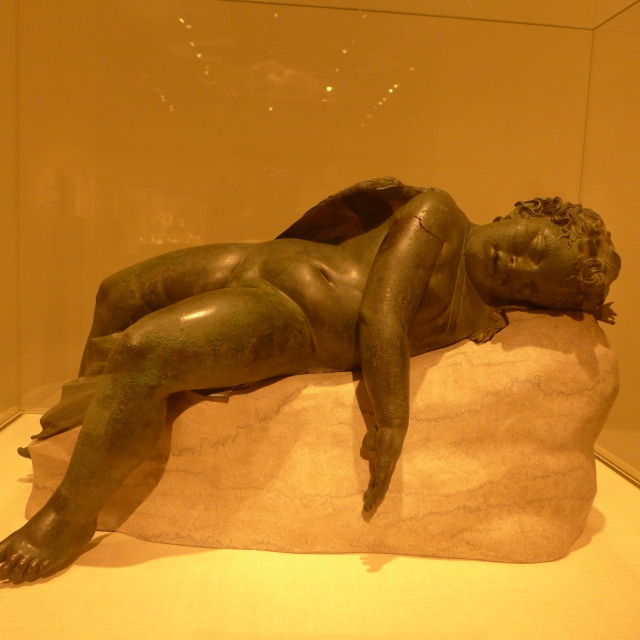 ‘Eros Sleeping’ at Pergamon and the Hellenistic Kingdoms of the Ancient World, on exhibit at the Met through July 17, 2016.

As soon as I entered the Met Museum’s magnificent survey of Hellenistic Art (Pergamon and the Hellenistic Kingdoms of the Ancient World, April 18-June 17, 2016) the voice of Miss Feytmans, who taught at my high school some 75 years ago, resounded in my head: “Alexander the Great, born in 353 BCE in Macedonia, died in Babylon…spread Greek culture…conquered the ancient world…gave rise to the Hellenistic culture…”

It was quite clear from Miss Feytmans’ tone that in her mind, great as Hellenistic art was (lasting from the death of Alexander in 323 BCE to the suicide of Cleopatra in 30 BCE), with its realism, fluid lines, and emotionalism…it was not quite as magnificent as the art of the idealized art of Greece’s Golden Age (480- 323 BCE). But then everybody, even my idol, is entitled to their prejudices. Antiquity’s best-known statues, or sometimes their Roman copies, date from Hellenistic times. These include, for example: the Nike of Samothrace and the Venus de Milo, both at the Louvre, and Laocoön and his Sons, now at the Vatican Museums in Rome.

The Met Museum is justifiably proud of the 265 Hellenistic objects it has assembled for this magnificent show. They range in size from small jewelry to a 13-foot marble statue of Athena. Some of the art on view seems extremely familiar. Alexander Astride his Horse Bucephalus, created by Lysippos 24 centuries ago, could easily take its place among Central Park’s 19th century statuary, as could the pudgy Eros Sleeping (150-100 BC), with his folded wings, who has been charming Met Museum visitors since 1943. Other familiar statues include the Dying Gaul, a slain Amazon, a sleeping hermaphrodite, and Spinario, a sculpture of a young boy pulling a thorn from his foot that has inspired sculptors throughout the ages.

Objects related to Pergamon, however, are the center of the exhibit.

The Berlin Pergamon Museum, which has reconstructed the west façade of the Altar of Zeus, is under repair and lent the Met Museum a third of the objects in the exhibition. The large bas-reliefs depicting the battle between the gods and the giants were too large to travel, but images and smaller panels provide an idea of the majesty of the monuments that according to many are the most famous of all surviving Hellenistic sculptural ensembles.

The Met exhibition also presents wonderful small objects: inlaid glass bowls, engraved gems and coins, leafy gold diadems, a plate painted with elephants and much more. Make sure to go; it is easier to go to Manhattan than to Berlin or Asia Minor.

Coming back to my own story: Miss Feytmans was my favorite teacher ever. She was a bachelorette living in Brussels with her sister Elise, the school’s Latin teacher, and perhaps her parents. I admired her unshakable love of Greece, her ability to make history come alive, her attitude, her neatly coiffed hair and her elegant suits. I was her star student, an achievement that contrasted with my usual lackluster scholastic performances.

I lost track of Denise Feytmans after I came to America in 1946, but 35 or so years later I attended a rheumatology congress in Canada where I met a Belgian physician. When he found out where in Brussels I had gone to school, he asked whether his great aunts Elise and/or Denise had taught me. He told me that Elise was still living in Brussels, but that Denise had married the director of National Museum in Athens. She was in the process of writing a book on Greek vases. Every so often she was about to finish it, but then she discovered another “must include” new vase. Who says that you can’t have paradise on earth?